While I've been very happy with my now heavily modified Ender 3 Pro, it does continue to have a few issues that are so fundamental that no amount of modding can correct them.

And the thing is, I really, really want to print faster and with higher quality. Fortunately, there is an alternative 3D printer design which supports this -- core-xy. In a core-xy printer, the print bed is either fully stationary, or only moves up and down in the Z axis. Instead, the print head is capable of moving across the entire build plate by itself. While it's possible to make a 3D printer meet this definition without being core-xy, many of the fastest printers are. In a core-xy printer, the print head is connected to two separate drives via belts. When one belt spools up, the other has to let out. This allows the motors to also be mounted to the printer frame, reducing overall mass needed to move when the print head travels.

While there are several different brands of core-xy printer out there, one struck my interest immediately: Voron. Voron isn't a brand, or even really a company, it's a collective which designs some of the best core-xy printers around using open source designs and readily available components. While it was tempting to build a big 2.4, the diminutive Voron 0.1 (often called "The Voron Zero") was immediately appealing to me. The printer is enclosed and very, very small; I would easily be able to store it in my office without issue. It's small print area of 100mm isn't a huge drawback for me as I rarely do large prints. I prefer smaller prints which can be assembled together. And of course, it's fast.

Voron is also different in one other respect. You can't buy from them. They have no store, offer no built machines, not even kits. Other companies have stepped in providing pre-made Voron kits, but the current chip shortage has left them all, for me, sold out. So instead, I'm building this by self-sourcing each, and every part.

Unlike every other machine I've built, the Voron 0.1 uses linear rails to allow for motion on all three axes. These are precision, machined parts with a sliding carriage. The first step in the build is to assemble four rails, two for the Z axis, and two for the Y axis. The X axis comes much later. The Voron 0.1 assembly manual provides clear directions on how and where to mount the linear rails.

This is also where I ran head-first into another aspect of this project. It's not simply that the printer is tiny, all the parts are tiny too! The linear rails required M2 hardware and special, 15mm square aluminum profiles. After an inexpensive initial test order of these profiles confirmed they were the right size and kind, I ordered more and all the parts needed to make the frame. Taking a lesson from the build of my CNC machine and the Laser machine, I decided to order all the parts pre-cut and tapped to size.With that done, mounting the rails was a matter of inserting M2 nuts into a printed carrier, and sliding that carefully into the extrusion. Printed centering guides and a caliper got me through this first, daunting step.

With the rails mounted to the profiles, the next step was to create the rear assembly. This combines two vertical rails with a square of plain aluminum profiles as support. The Voron 0.1 uses an interesting construction method that I haven't seen before with aluminum profiles. Most profiles look like four arrows pointing away from each other at right angles from a central point. It looks a bit like an X with an arrow tip on each end. Instead of conventional "V-groove" profiles, however, the 0.1 uses a special kind of 15mm square profile. The interior channel isn't so much a V as it is an lower-case t. This allows for M3 nuts to be simply inserted into the end and be perpendicular to the face of the profile.

But there's one more trick up it's sleeve on which the Voron relies heavily. Using button-head bolts, you can slide them into the t channel head-down. To access them, a through-hole is drilled in the middle of the profile so that an hex wrench can be passed through and tighten the bolt. It's an ingenious method, and saves a lot of otherwise bulky gusset plates and re-enforcing brackets.

This process seemed harder for the first one, but very straightforward for the rest. As a bonus, if you miss the place to drill, widen the hole some more. The dimensions aren't critical.

The next thing to build was what I'll call the rear assembly. It has two profiles with linear rails for the Z-axis, and a square of profiles as a frame. To keep this flat while assembling, I used a woodworking trick of a large piece of plate glass.

The bed assembly was the goal for my weekend. I wanted to put together the small three piece arrangement of profiles and their three printed parts and mount them to the rear assembly.

I quickly found that I was missing key hardware for this. Unlike the button head bolts I've used so far on this build, the bed assembly mounted to the linear rails using cap head bolts. While I had plenty of M3 bolts in that form, I had no M2 versions. Acknowledging I'd have to disassemble this later anyways, I used the button head bolts and mounted it on the rear assembly anyways.

The result, while simple, left me giddy.

The rest of the frame, kinda

I couldn't resist wanting to build the rest of the frame of the printer despite not having all the final hardware available. It was simply too tempting to ignore and leave as a pile of parts on my workbench for the next week or more.

The rest of the frame came together much more quickly now that all the profiles were prepped. I only needed to bolt them together. The only nerve-wracking part was the two top parts which held the Y axis rails. The assembly manual leaves these hanging in mid-air by one bolt for a few steps. Thankfully, the one bolt was enough and I was able to build the rest of the Voron 0.1 cubular frame easily

For the moment, I'm still in the process of printing out more of the parts needed to assemble the printer. There's also a lot more parts to buy, including all of the electronics. So far, however, the experience has been downright joyful. Each printed part is well designed and prints quickly and easily even on my Ender 3. The small size is challenging, but also endearing. I honestly just want to pick up this printer and give it a hug. 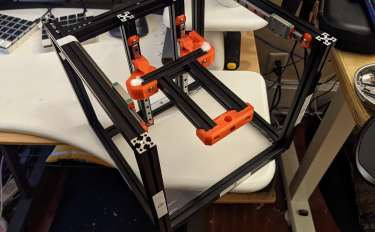 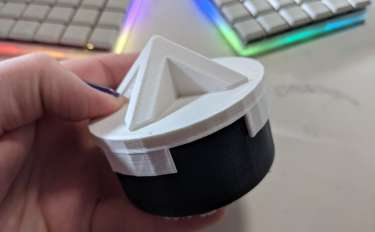